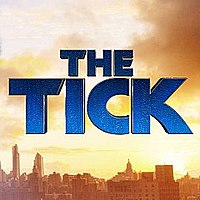 The Tick is an American web television series created for Amazon Video by Ben Edlund, based on his comic book character of the same name. Its pilot premiered on August 18, 2016. A "half-season", through to the sixth episode, was released on August 25, 2017, and another six episodes were released on February 23, 2018. On January 17, 2018, Amazon ordered a second season of ten episodes, which premiered on April 5, 2019. Edlund revealed on Twitter that Amazon Video has declined to renew the series for a third season.

The Tick is a nigh invulnerable superhero in a blue tick suit who arrives in the city to help combat crime and uncover the mysterious figure behind the city's underworld. He befriends a nervous and mild-mannered young man named Arthur who becomes his sidekick. They come to realize that an apparently long-dead supervillain called "The Terror" may still be pulling the strings in the city's underworld.