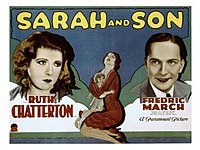 Sarah and Son is a 1930 pre-Code American drama film directed by Dorothy Arzner. The screenplay by Zoë Akins was adapted from Timothy Shea's novel of the same name. It stars Ruth Chatterton, Fredric March, Gilbert Emery, and Doris Lloyd. It was filmed at Paramount Studios in Los Angeles and released by Paramount Pictures.

Sarah Storm, an Austrian immigrant, has taken up with Jim Grey, with the goal of both of them becoming vaudeville entertainers. Months after their stage debut, they now have a baby boy and no steady income, and Jim expresses little interest in finding work or supporting the family. After a fight with Sarah, Jim tries to get a loan from John Ashmore, a wealthy businessman, who denies his request, but mentions his envy at Jim's fatherhood, since his wife cannot bear children. On a whim, Jim enlists with the Marines for four years, and goes drinking. After returning home and quarreling again with Sarah, he disappears with their young son Bobby, intending to sell him to the Ashmores. The heartbroken Sarah is given a job singing with an itinerant musician, Cyril Belloc.