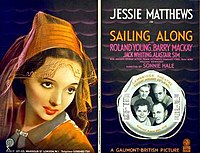 Sailing Along is a 1938 British musical comedy film directed by Sonnie Hale and starring Jessie Matthews, Barry MacKay, Roland Young, Jack Whiting, Frank Pettingell, Noel Madison and Alastair Sim. The screenplay concerns a woman who gives up her chances of stardom to be with a man.

A barge-owner's adopted daughter, Jessie Mathews falls in love with his son, and gives up her chances of stardom to be with him.