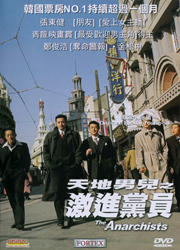 Anarchists is a 2000 South Korean action film directed by Yoo Young-sik and co-written by Park Chan-wook. Set in Shanghai in 1924, the film is about a covert cell of insurrectionist anarchists who attempt to overthrow the Japanese government's occupation of Korea through propaganda of the deed. Told from the perspective of the youngest member, Sang-gu, years after the fact, the story is a sympathetic look at a group of revolutionaries through the eyes of one of their own.

In the opening scene the protagonist begins to reminisce about his youth and remembers the day he was saved from execution in a raid performed by the anarchist cell he would later join. After reaching a safe house the group begins to teach him the tricks of their trade. He later takes part in several missions, though he continues to have difficulty throughout the film with the violence of his new job.