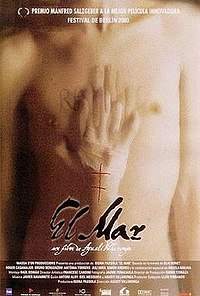 The Sea is a 2000 Spanish film directed by Agustí Villaronga, starring Roger Casamayor. It is based on a novel by Blai Bonet. The plot, set in Mallorca, follows the fates of three childhood friends traumatized by the violence they witnessed during the Spanish Civil War. Ten years later, they are reunited as young adults in a sanatorium for TB patients. The film won the Manfred Salzgeber Award at the Berlin International Film Festival.

In the summer of 1936, the violence of the Spanish Civil war reaches a small village in Mallorca. Four children: Andreu Ramallo, Manuel Tur, Pau Inglada and a girl, Francisca, are witness to the execution of leftists at the hands of pro-Franco villagers. In a desperate act of revenge, Pau, whose father has been killed the previous day by the lead executioner, plans to avenge his father's murder torturing Julià Ballester, the son of his father's killer. His idea is to force the boy to drink castor oil. However, things go wrong when the boy, Julià Ballester, taunts them and Pau becomes enraged. He brutally kills Julià by bashing his head against a rock and then stabbing him in the throat. Unable to deal with what he has just done, Pau commits suicide jumping inside a hole on a cave. The remaining children: Andreu, Manuel, and Francisa are witnesses to these tragic events.