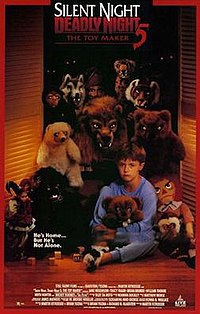 Late one night in December, a young boy named Derek Quinn (William Thorne) hears the doorbell ringing and goes downstairs and finds a Christmas present that has been addressed to him on the porch. His father Tom (Van Quattro) reprimands him for being up so late and opening the door, sending him off to bed. Instead Derek watches from the stairs as his curious father opens the gift. Finding a musical orb shaped like Santa Claus in the box he activates it, causing it to strangle him with retractable cords; as Tom struggles he slips and falls onto a fireplace poker, his impaled body being found by his wife Sarah (Jane Higginson) a few moments later.