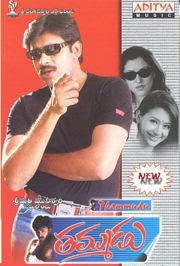 Thammudu is a 1999 Indian Telugu-language sports action film produced by Burugupalli Sivaramakrishna under the Sri Venkateswara Art Films banner, written and directed by P. A. Arun Prasad. The movie was loosely based on the 1992 Hindi film Jo Jeeta Wohi Sikandar which itself was a remake of the 1979 movie Breaking Away.

The movie begins with the rivalry between Model College and Government College. Subrahmanyam (Pawan Kalyan), the youngest son of a family, is a wastrel, gypsy, and ladies man. He has a bunch of friends, including Kodandarama Manoharam (Ali). His father Vishwanadh (Kitty) always scolds him for his attitude, but his brother Chakri (Achyuth), who is a determined boxer, and friend Jaanu (Preeti Jhangiani) dote on him. Meanwhile, Subbu falls in love with a rich diva, Lovely (Aditi), who is from the rival college, and for this, he keeps on telling lies to her that he is very rich. His brother Chakri and Rohit (Bhupinder Singh) are rivals and are pro boxers. Chakri eventually loses the much-hyped university boxing championship to Rohit. Meanwhile, Jaanu truly loves Subrahmanyam and gives him everything he asks her for, thinking that he is doing these for her, but he does it for Lovely. While the final of the next boxing tournament is coming up against his former opponent Chakri, Rohit realises that Subbu is behind his crush Lovely, beats up Chakri, and injures him fatally, thereby seeking his revenge on Subbu and aborting Chakri's match against him in the next week. The incidents that led Subrahmanyam to change, the way he realized the true love of Jaanu, and the final twist of him becoming a boxing champion by beating Rohit is the real plot to be seen.