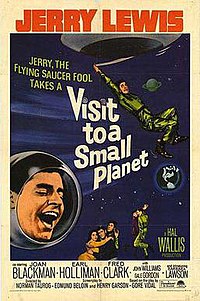 Visit to a Small Planet is a 1960 American black-and-white science fiction comedy film directed by Norman Taurog and starring Jerry Lewis, Joan Blackman, Earl Holliman, and Fred Clark. Distributed by Paramount Pictures, it was produced by Hal B. Wallis.

Kreton (Jerry Lewis) is an alien from the planet X-47 who is fascinated by human beings. Against the wishes of his teacher, he repeatedly visits Earth. During his latest visit, his teacher reluctantly agrees to allow him to stay and study the humans. Kreton becomes friends with a suburban family and stays with them after they agree to keep his alien status a secret. Along the way, he falls in love with their daughter (Joan Blackman). However, there is a force field around him that prevents any physical contact. His race has abolished any form of affection.