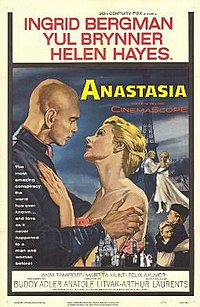 Anastasia is a 1956 American period drama film directed by Anatole Litvak and written by Arthur Laurents. Set in interwar France, the film follows a plot related to rumors that the Grand Duchess Anastasia Nikolaevna of Russia, the youngest daughter of the late Tsar Nicholas II and Empress Alexandra Feodorovna, survived the execution of her family in 1918. Russian General Bounine (Yul Brynner), former leader of the White Army during the Russian Revolution, along with his associates plot to swindle an inheritance of £10 million from the Grand Duchess using an amnesiac (Ingrid Bergman) who looks remarkably like the missing Anastasia. The exiled émigrés of the Russian aristocracy, in particular the Dowager Empress Marie Feodorovna (Helen Hayes) of Denmark, must be convinced that their handpicked claimant is legitimate if the plotters are to get her money.

Though the last Russian Tsar and his family were executed in 1918, rumors persisted that his youngest daughter, the Grand Duchess Anastasia, somehow survived. In 1928 Paris, Anna, an ailing woman resembling Anastasia, is brought to the attention of former White Russian General Bounine, now the proprietor of a successful Russian-themed nightclub. Bounine knows that while Anna was in a mental asylum being treated for amnesia, she told a nun that she was Anastasia. When approached by Bounine and addressed as the grand duchess, she refuses to have anything to do with him. She flees and tries to throw herself into the River Seine, but is stopped.