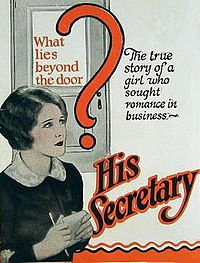 His Secretary is a 1925 American silent comedy film directed by Hobart Henley. The film starred Norma Shearer and Lew Cody. It is now considered lost.

Comedy about an ugly duckling who overhears her boss saying he wouldn't kiss her for a thousand dollars. She then goes to a beautician.