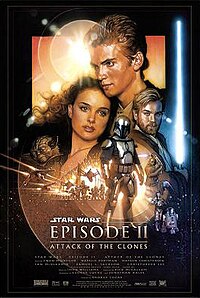 Star Wars: Episode II – Attack of the Clones is a 2002 American epic space-opera film directed by George Lucas and written by Lucas and Jonathan Hales. It is the second installment of the Star Wars prequel trilogy, the fifth Star Wars film to be produced, and the second film in the "Skywalker saga." It stars Ewan McGregor, Natalie Portman, Hayden Christensen, Ian McDiarmid, Samuel L. Jackson, Christopher Lee, Anthony Daniels, Kenny Baker, and Frank Oz. Set ten years after the events in The Phantom Menace, the plot sees the galaxy on the brink of civil war, with thousands of planetary systems threatening to secede from the Galactic Republic and join the Confederacy of Independent Systems, led by the former Jedi-turned-Sith Lord Count Dooku. After Senator Padmé Amidala evades an assassination attempt, Jedi Apprentice Anakin Skywalker becomes her protector and develops a secret relationship with her, while his mentor Obi-Wan Kenobi investigates the attempt on her life, leading him to uncover a clone army in service of the Republic. Soon, the trio witness the onset of a new threat to the galaxy: the Clone Wars.

The Galactic Republic is threatened by a Separatist movement organized by former Jedi Master Count Dooku. Senator Padmé Amidala comes to Coruscant to vote on a motion to create an army to assist the Jedi against the threat. Narrowly avoiding an assassination attempt upon her arrival, she is placed under the protection of Jedi Master Obi-Wan Kenobi and his apprentice Anakin Skywalker. The pair thwart a second attempt on Padmé's life and subdue the assassin, Zam Wesell, who is killed by her employer, a bounty hunter, before she can reveal his identity. The Jedi Council instructs Obi-Wan to find the bounty hunter, while Anakin is tasked to protect Padmé and escort her back to Naboo, where the two fall in love in spite of the Jedi Code that forbids relationships.