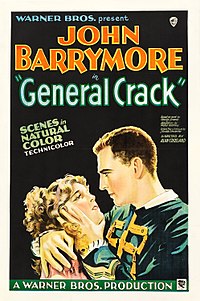 General Crack is a 1929 American pre-Code part-talkie historical costume melodrama with Technicolor sequences which was directed by Alan Crosland and produced and distributed by Warner Bros. It was filmed and premiered in 1929, and released early in 1930. It stars John Barrymore in his first full-length all-talking feature. The film would prove to be Crosland and Barrymore's last historical epic together.

The film takes place in the 18th century Austria and revolves around Prince Christian, commonly known as General Crack (John Barrymore). His father had been a respectable member of the upper ranks of the nobility but his mother was a gypsy. General Crack, as a soldier of fortune, spent his adult life selling his services to the highest bidder. He espouses the doubtful cause of Leopold II of Austria (Lowell Sherman, reigned 1790-1792) after demanding the sister of the emperor in marriage as well as half of the gold of the Holy Roman Empire. Before he has finished his work, however, he meets a gypsy dancer (Armida) and weds her. Complications arise when he takes his gypsy wife to the Austrian court and falls desperately in love with the emperor's sister (Marian Nixon). The court sequence was originally in Technicolor and proved to be Barrymore's last appearance in color.