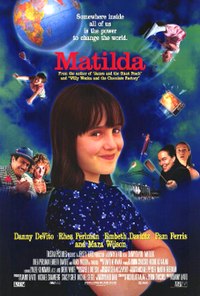 Matilda is a 1996 American fantasy comedy-drama film co-produced and directed by Danny DeVito, from a screenplay written by Nicholas Kazan and Robin Swicord. Based on Roald Dahl's 1988 novel of the same name, the film stars Mara Wilson as the title character with DeVito (who also served a dual role as the narrator), Rhea Perlman, Embeth Davidtz and Pam Ferris in supporting roles. The film centers on a young genius girl named Matilda Wormwood, who develops psychokinetic abilities and uses them to deal with her disreputable family and Agatha Trunchbull, the ruthless, oppressive and tyrannical principal of Crunchem Hall Elementary School. Produced by DeVito's Jersey Films and released theatrically in the United States on August 2, 1996 by Sony Pictures Releasing through TriStar Pictures label. Critics praised DeVito's direction and faithfulness to the spirit of the source material. The film grossed $33.5 million in the United States on a $36 million budget.

Young genius Matilda Wormwood is regularly neglected and mistreated by her parents, Harry and Zinnia, and her older brother, Michael. She is smart, independent and frequently goes to the public library where she finds solace in the fictional worlds found in the books. When Matilda's parents refuse to enroll her into school, she retaliates against them, first by adding hydrogen peroxide bleaching agent to her father's hair tonic and then by gluing his hat to his head. When Harry rips up the library's copy of Moby-Dick (which he finds offensive because of the title) and forces Matilda to watch television instead, Matilda becomes increasingly enraged until the television explodes.