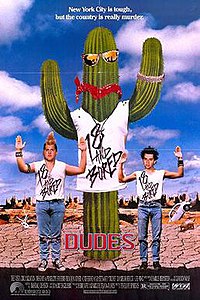 Dudes is a 1987 American independent film directed by Penelope Spheeris, written by Randall Jahnson, and starring Jon Cryer, Catherine Mary Stewart, Daniel Roebuck, and Lee Ving. A Western revenge story in a contemporary setting, its plot concerns three punk rockers from New York City who attempt to make their way to California. When one of them is murdered by a vicious gang leader, the other two, played by Cryer and Roebuck, find themselves fish out of water as they pursue the murderer from Arizona to Montana, assisted by a tow truck driver played by Stewart.

Grant, Biscuit, and Milo are punks living in Queens. Bored with their lives, they decide to move to Los Angeles, and set out on a cross-country drive. In Utah they assist Elvis impersonator "Daredelvis" with getting his trailer unstuck. Later, Grant sees a mirage of a cowboy on horseback. While camping in the Arizona desert they are attacked by a gang of vicious rednecks, and Milo is murdered by their leader, Missoula. Grant and Biscuit escape and collapse in the desert, where Grant again sees a vision of the cowboy.