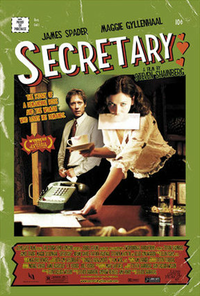 Lee Holloway (Maggie Gyllenhaal), the socially awkward and emotionally sensitive youngest daughter of a dysfunctional family, adjusts to normal life after having been hospitalized following an incident of dangerous self-harm. She learns to type and applies for a job as a secretary for an eccentric attorney, E. Edward Grey (James Spader). Grey explains she is overqualified for the job (having scored higher than anyone he has ever interviewed) and that it is "very dull work" as they only use typewriters; Lee, however, agrees to work under these conditions.