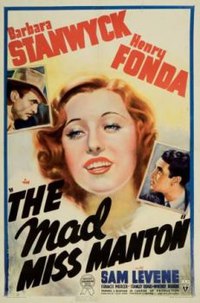 The Mad Miss Manton is a 1938 American screwball comedy-mystery film directed by Leigh Jason and starring Barbara Stanwyck as fun-loving socialite Melsa Manton and Henry Fonda as newspaper editor Peter Ames. Melsa and her debutante friends hunt for a murderer while eating bonbons, flirting with Ames, and otherwise behaving like silly young women. Ames is also after the murderer, as well as Melsa's hand in marriage.

At 3:00 am, Melsa Manton takes her little dogs for a walk. Near a subway construction site, she sees Ronnie Belden run out of a house and drive away. The house is for sale by Sheila Lane, the wife of George Lane, a wealthy banker. Inside, Melsa finds a diamond brooch and George's dead body. As she runs for help, her cloak falls off with the brooch inside it. When the police arrive, the body, cloak, and brooch are gone. Melsa and her friends are notorious pranksters, so the Lieutenant, Mike Brent, does nothing to investigate the murder. Peter Ames writes an editorial decrying Melsa's "prank", and she sues him for libel.