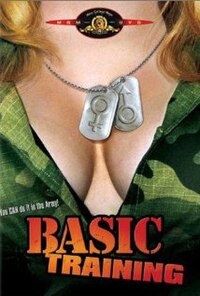 Basic Training (a.k.a. Up the Military) is a 1985 sex comedy film by Andrew Sugerman. It is often considered to be one of the worst films of 1985. While set in Washington D.C., most of the production was filmed in Los Angeles, including Bob Hope Patriotic Hall. During production the working title was "Up the Pentagon."

The film follows Melinda, a female employee of the Pentagon's public information service, who loses her job when she refuses to give in to her male superiors' sexual advances. She then becomes outraged by the Pentagon's "un-patriotic" actions, and takes revenge on them by using her physical charms to seduce the top brass into letting her back into the Pentagon. After being re-employed, she sets out to manipulate them to her will and destroy their careers, thus ridding the US government of what she sees as "perverts", who care more about cheap thrills than national security. She eventually seduces the Russian ambassador into betraying valuable military secrets by offering him among other things "the most scrumptious little breasts" as well as something (left unsaid) which she declares to be the "softest, moistest, sweetest". In the end she is appointed Secretary of Defense as a reward.