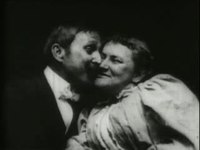 The Kiss (also known as The May Irwin Kiss, The Rice-Irwin Kiss and The Widow Jones) is an 1896 film, and was one of the first films ever shown commercially to the public. Around 18 seconds long, it depicts a re-enactment of the kiss between May Irwin and John Rice from the final scene of the stage musical The Widow Jones. The film was directed by William Heise for Thomas Edison. The film was produced in April 1896 at the Edison Studios of Edison, the first movie studio in the United States. At the time, Edison was working at the Black Maria studios in West Orange, New Jersey.