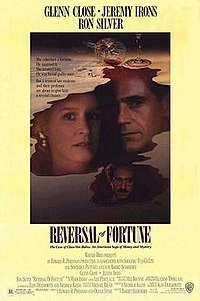 Reversal of Fortune is a 1990 American drama film adapted from the 1985 book Reversal of Fortune: Inside the von Bülow Case, written by law professor Alan Dershowitz. It recounts the true story of the unexplained coma of socialite Sunny von Bülow, the subsequent attempted murder trial, and the eventual acquittal of her husband, Claus von Bülow, who had Dershowitz acting as his defense. The film was directed by Barbet Schroeder and stars Jeremy Irons as Claus, Glenn Close as Sunny, and Ron Silver as Dershowitz. Screenwriter Nick Kazan originally envisioned Austrian actor Klaus Maria Brandauer in the role of Claus von Bülow, but was thrilled with Irons' performance. Irons earned the 1990 Academy Award for Best Actor for his performance in the film.

The story is narrated by Sunny von Bülow, who is in a coma after falling into diabetic shock after a Christmas party. Her husband, the dissolute European aristocrat Claus von Bülow, is charged with attempting to murder the hypoglycemic Sunny by giving her an overdose of insulin. Claus's strained relationship with his wife and his cold and haughty personal demeanor led most people to conclude that he is guilty. In need of an innovative defense, Claus turns to law professor Alan Dershowitz. Dershowitz is initially convinced of Claus's guilt, but takes the case because von Bülow agrees to fund Dershowitz's defense of two poor black boys accused of capital murder. Employing his law students as workers, Dershowitz proceeds to defend Claus, wrestling with his client's unnerving personal style and questions of von Bülow's guilt or innocence.