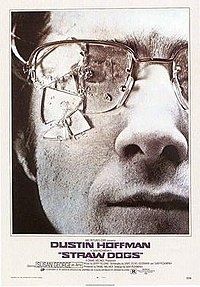 Straw Dogs is a 1971 psychological thriller film directed by Sam Peckinpah and starring Dustin Hoffman and Susan George. The screenplay, by Peckinpah and David Zelag Goodman, is based upon Gordon M. Williams's 1969 novel, The Siege of Trencher's Farm. The film's title derives from a discussion in the Tao Te Ching that likens people to the ancient Chinese ceremonial straw dog, being of ceremonial worth, but afterwards discarded with indifference.

After securing a grant to study stellar structures, American applied mathematician David Sumner moves with his glamorous young Cornish wife Amy to a house near to her home village of Wakely in the Cornish moorland. Amy's ex-boyfriend Charlie Venner, along with his cronies Norman Scutt, Chris Cawsey, and Phil Riddaway, immediately resent that the meek outsider has married one of their own. Scutt, a former convict, confides in Cawsey his jealousy of Venner's past relationship with Amy. David meets Venner's uncle, Tom Hedden, a violent drunkard whose flirtatious teenage daughter Janice seems to be in love with Henry Niles, a mentally deficient man despised by the entire town.