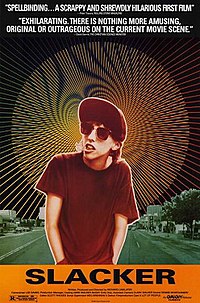 Slacker is a 1990 American independent comedy-drama film written, produced, and directed by Richard Linklater, who also appears in the film. Slacker was nominated for the Grand Jury Prize - Dramatic at the Sundance Film Festival in 1991.

Slacker follows a single day in the life of an ensemble of mostly under-30 bohemians and misfits in Austin, Texas. The film follows various characters and scenes, never staying with one character or conversation for more than a few minutes before picking up someone else in the scene and following them.