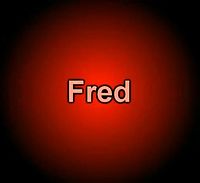 Fred Figglehorn (stylized on webpages as FЯED) is the central character in an Internet video series created by Lucas Cruikshank in 2006. Cruikshank, a teenager from Columbus, Nebraska, created the Fred video series for his channel on the video-sharing website YouTube, to center on the Fred character. Although Cruikshank voiced Fred, the audio was digitally altered to sound higher-pitched than Cruikshank's true voice.