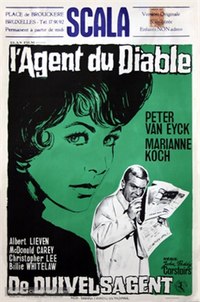 The Devil's Agent is a 1962 drama film directed by John Paddy Carstairs and starring Peter van Eyck, Marianne Koch, Christopher Lee and Macdonald Carey. It was a co-production between Britain, West Germany and the Republic of Ireland. It was based on a novel by Hans Habe. It is set in East Germany during the Cold War.

Mild-mannered Viennese wine merchant George Droste (Peter van Eyck), an intelligence expert during the second world war, unexpectedly encounters old friend Baron Von Staub (Christopher Lee), and spends a weekend with him on his estate in the Soviet zone. The two revive a friendship interrupted by the war. However, when Von Straub's sister asks Droste to transport a small package to a friend in West Germany, the bewildered Droste is set up for a series of complicated spy games, at first becoming an unwilling dupe for the Russians, and then retaliating by offering his services to a US intelligence agency.