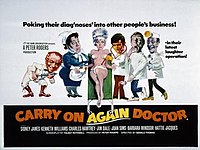 Carry On Again Doctor is a 1969 British comedy film, the 18th release in the series of 31 Carry On films (1958–1992). It was released in December 1969 and was the third to feature a medical theme. The film features series regulars Sid James, Kenneth Williams, Charles Hawtrey, Joan Sims, Barbara Windsor and Hattie Jacques. This was Jim Dale's last Carry On appearance for 23 years until his return in Carry On Columbus. It also marks the debut of Patsy Rowlands to the series in her first of 9 appearances.

At the Long Hampton Hospital, Dr Jimmy Nookey (Jim Dale) seems to attract trouble, beginning with an incident in the women's washroom, which he'd mistakenly entered, frightening the highly-strung Miss Armitage out of her senses. Nookey's carefree manner isn't to everyone's liking at the hospital, with Dr. Stoppidge (Charles Hawtrey) wanting Nookey sacked for the washroom incident. Accident-prone Nookey then quickly falls in love with a film star patient named Goldie Locks (Barbara Windsor). During some misadventures with the hospital's X-ray machine Nookey triggers a massive short circuit in the hospital's electrical system resulting in more mayhem. With the hospital Matron (Hattie Jacques) and his moody boss Dr. Frederick Carver (Kenneth Williams) now watching his every move, Dr. Nookey drinks a fruit punch spiked by jealous Dr. Stoppidge at the staff party. The drunk Nookey ends up crashing through a window on a hospital trolley, after he had almost got into bed with a patient. Goldie leaves Nookey, as the latter is not interested in marriage. Meanwhile, Carver and his rich patient Ellen Moore (Joan Sims) dispatch the disgraced Nookey to Moore's medical mission in the Beatific Islands, where it rains for nine months of the year. Nookey discovers Gladstone Screwer (Sid James), the local medicine man, who has a weight-loss serum. Nookey soon returns to England and opens a new surgery with Mrs. Moore, much to the anger of Carver. While Matron joins Dr. Nookey's clinic, Carver and Stoppidge plot to try to steal the serum. Stoppidge dresses as a female patient to effect the theft, but his luck runs out when Nookey catches him in the act. Goldie returns to have the serum as well, much to Nookey's chagrin. Gladstone quickly discovers that Nookey is making a fortune from his serum, and cuts off his supply to deliver the serum in person and get in on the action. Nookey prevaricates, so Gladstone gives him a serum, which in fact seems to cause sex changes! The movie ends with Nookey and Goldie getting married and the rest of the staff of the Long Hampton Hospital becoming friends again.