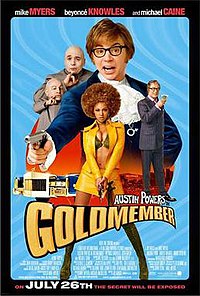 From his secret lair located behind the Hollywood Sign in Los Angeles, California, Dr. Evil unveils to his top lieutenant Number 2, his clone Mini-Me, lover Frau Farbissina, and their son Scott Evil that his plan for world domination is to travel back in time to 1975 and partner with the Dutch, gold obsessed Johan van der Smut, who after losing his genitalia in a smelting accident, is known by the alias "Goldmember". Goldmember developed a cold fusion power unit for a tractor beam which Dr. Evil names "Preparation H" and he intends to use it to pull a meteor into the earth, striking the polar ice caps and causing a global flood. Moments after this plan is revealed, Austin Powers and the British Intelligence invade the lair and arrest Dr. Evil and Mini-Me. In England, the Queen knights Austin for his service, but is disappointed when his father, the famous super-spy Nigel Powers, does not attend the event. During an after party, Basil Exposition informs Austin that Nigel has been kidnapped and the only clue is that the crew of his yacht have had their genitalia painted gold.