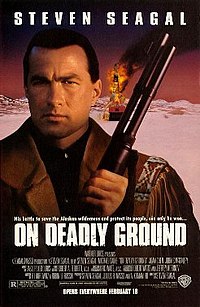 On Deadly Ground is a 1994 American environmental action adventure film directed, co-produced by, and starring Steven Seagal, and co-starring Michael Caine, Joan Chen, John C. McGinley and R. Lee Ermey. It is Seagal's only directorial effort and features a minor appearance by Billy Bob Thornton in one of his early roles. Seagal plays Forrest Taft, an expert firefighter who chooses to fight back against the environmental destruction caused by his ruthless former employer (Caine).

Aegis Oil owns various oil refineries and rigs in Alaska, where the company faces great opposition from the public due to the increasing environmental damage done by its operations. Aegis had purchased the oil production rights from the local Tribal Council 20 years prior; however, the rights will revert to the natives if Aegis 1, the company's newest oil platform and biggest refinery, is not online within a certain deadline. In order to make the deadline, CEO Michael Jennings forces his workers to use substandard parts.