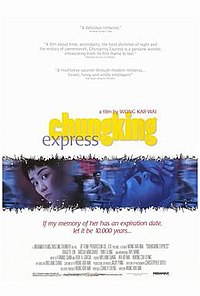 Chungking Express is a 1994 Hong Kong romantic crime comedy-drama film written and directed by Wong Kar-wai. The film consists of two stories told in sequence, each about a lovesick Hong Kong policeman mulling over his relationship with a woman. The first story stars Takeshi Kaneshiro as a cop obsessed by his breakup with a woman named May, and his encounter with a mysterious drug smuggler (Brigitte Lin). The second stars Tony Leung as a police officer roused from his gloom over the loss of his flight attendant girlfriend (Valerie Chow) by the attentions of a quirky snack bar worker (Faye Wong).

Taiwan-raised cop He Qiwu is dumped by his girlfriend named May on 1 April. To verify her earnestness in breaking up with him, Qiwu chooses to wait for a month. Every day he buys a tin of pineapples with an expiration date of 1 May, because May enjoyed pineapples and 1 May was his birthday. Meanwhile, a woman in a blonde wig tries to survive in the drug underworld after a smuggling operation goes sour.