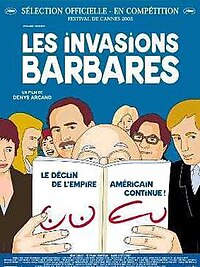 The Barbarian Invasions is a 2003 Canadian-French sex comedy-drama film written and directed by Denys Arcand and starring Rémy Girard, Stéphane Rousseau and Marie-Josée Croze. The film is a sequel to Arcand's 1986 film The Decline of the American Empire, continuing the story of the character Rémy, a womanizing history professor now terminally ill with cancer.

Seventeen years after the events of The Decline of the American Empire, Sébastien is enjoying a successful career in quantitative finance in London when he receives a call from his mother, Louise, that his father and Louise's ex-husband Rémy is terminally ill with cancer. Sébastien is not enthused about seeing Rémy, whom he blames for breaking up the family with his many adulteries. Rémy and his friends of the older generation are still largely social-democrats and proponents of Quebec nationalism, positions seeming somewhat anachronistic long after the Quiet Revolution of the 1960s. Rémy does not like Sébastien's career, lack of reading or fondness for video games.