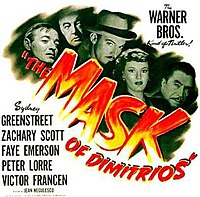 The Mask of Dimitrios is a 1944 American film noir directed by Jean Negulesco and written by Frank Gruber, based on the 1939 novel of the same name written by Eric Ambler (in the United States, it was published as A Coffin for Dimitrios).

In 1938, Dutch mystery writer Cornelius Leyden (Peter Lorre) is visiting Istanbul. A fan of his, Colonel Haki (Kurt Katch) of the Turkish police, believes Leyden would be interested in the story of Dimitrios Makropoulos (Zachary Scott), whose body was just washed up on the beach. Leyden is so fascinated by what Haki tells of the dead criminal that he becomes determined to learn more.