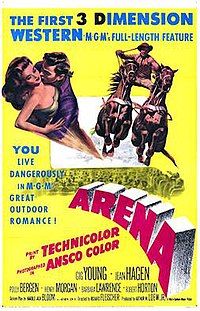 Arena is a 1953 Ansco Color 3-D film directed by Richard Fleischer and starring Gig Young, Jean Hagen, and Polly Bergen. It was promoted as "the first 3-D western" of the era.

A man named Hob Danvers comes to a Tucson, Arizona rodeo with Sylvia Lorgan in tow. Hob has been separated from wife Ruth for two years, and doesn't realize she intends to be at the rodeo.