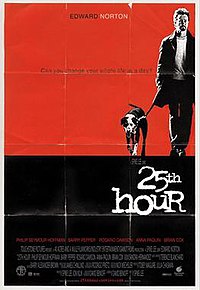 25th Hour is a 2002 American drama film directed by Spike Lee and starring Edward Norton. Adapted by David Benioff from his own novel The 25th Hour, it tells the story of a man's last 24 hours of freedom as he prepares to go to prison for seven years for dealing drugs.

A car pulls up short on a New York City street, and Montgomery "Monty" Brogan gets out with his buddy Kostya to look at a dog lying in the road. The animal may have been mauled in a dogfight so Monty intends to shoot him, but changes his mind after he looks it in the eye. Monty decides to take the dog to a nearby clinic instead.