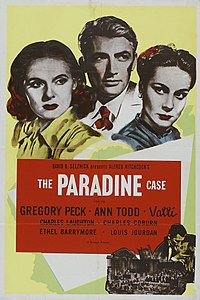 The Paradine Case is a 1947 American film noir courtroom drama film, set in England, directed by Alfred Hitchcock and produced by David O. Selznick. The screenplay was written by Selznick and an uncredited Ben Hecht, from an adaptation by Alma Reville and James Bridie of the 1933 novel of the same title by Robert Smythe Hichens. The film stars Gregory Peck, Ann Todd, Alida Valli, Charles Laughton, Charles Coburn, Ethel Barrymore, and Louis Jourdan. It tells of an English barrister who falls in love with a woman who is accused of murder, and how it affects his relationship with his wife.

In London, Maddalena Anna Paradine (Alida Valli) is a very beautiful and enigmatic young Italian woman who is accused of poisoning her older, blind husband, a wealthy retired colonel. It is not clear whether she is a grateful and devoted wife who has been falsely charged or a calculating and ruthless femme fatale.