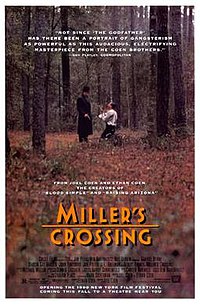 Miller's Crossing is a 1990 American neo-noir gangster film written, directed and produced by the Coen brothers and starring Gabriel Byrne, Marcia Gay Harden, John Turturro, Jon Polito, J. E. Freeman, and Albert Finney. The plot concerns a power struggle between two rival gangs and how the protagonist, Tom Reagan (Byrne), plays both sides against each other.

Tom Reagan is the right-hand man for Leo O'Bannon, an Irish mobster and political boss who runs a U.S. city during Prohibition. When Leo's rival, the Italian gangster Johnny Caspar, announces his intent to kill bookie Bernie Bernbaum, Leo goes against Tom's advice and extends his protection to Bernie, who is the brother of Verna, who has begun a relationship with Leo – while also carrying on an affair with Tom.