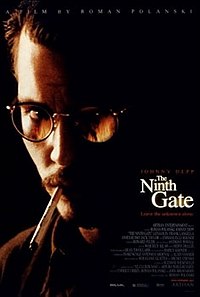 The Ninth Gate is a 1999 mystery thriller film directed, produced, and co-written by Roman Polanski. An international co-production between the United States, Portugal, France, and Spain, the film is loosely based upon Arturo Pérez-Reverte's 1993 novel The Club Dumas. The plot involves authenticating a rare and ancient book that purportedly contains a magical secret for summoning the Devil. The premiere showing was at San Sebastián, Spain, on 25 August 1999, a month before the 47th San Sebastian International Film Festival. Though critically and commercially unsuccessful in North America, where reviewers compared it unfavorably with Polanski's supernatural film Rosemary's Baby (1968), The Ninth Gate earned a worldwide gross of $58.4 million against a $38 million budget.

Dean Corso, a New York City rare book dealer, makes his living conning people into selling him valuable antique books for a low price, and then re-selling them to private collectors. Corso meets with wealthy book collector Boris Balkan, who has recently acquired a copy of The Nine Gates of the Kingdom of Shadows by 17th-century author Aristide Torchia, one of only three extant copies. The author adapted the book from one written by the Devil himself, and was burned for heresy. "The Nine Gates" purportedly contains the means to summon the Devil and acquire invincibility and immortality. Balkan believes two of the three copies are forgeries. He hires Corso to check all three and acquire the legitimate one by any means necessary.