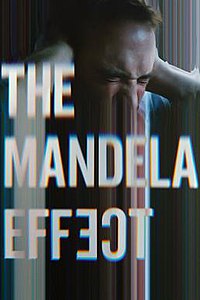 The Mandela Effect is a 2019 science fiction film written and directed by David Guy Levy, starring Charlie Hofheimer as a father grieving for the loss of his daughter, played by Madeleine McGraw, who becomes obsessed with facts and events that many people remember incorrectly. Aleksa Palladino plays his also-grieving wife, while Robin Lord Taylor plays his best friend and brother-in-law. He turns to a washed-up scientist, played by Clarke Peters, to discover that the reality they are experiencing is part of computer simulation.

Computer game designer Brendan (Charlie Hofheimer) and his wife, Claire (Aleksa Palladino), are grieving for the death of their young daughter, Sam (Madeleine McGraw). As the couple reluctantly rummage through Sam's possessions in her bedroom, Brendan finds Sam's copy of the children's classic storybook "The Berenstein Bears." However, to Brendan's bewilderment, the title is actually "The Berenstain Bears." Even though Brendan and his brother-in-law, Matt (Robin Lord Taylor), believe that their memory of the name's spelling is accurate, they find no evidence that the name was ever changed. This leads Brendan to explore many other examples of the "The Mandela Effect", or commonly held "false" memories. Brendan and Claire discover further discrepancies among their memories and "reality", namely between the spelling and appearance of fictional characters, such as remembering that Curious George had a tail, when in fact it lacks one.