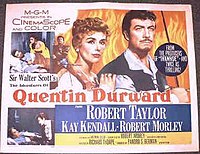 The Adventures of Quentin Durward 1955

The Adventures of Quentin Durward, known also as Quentin Durward, is a British-American 1955 historical film released by MGM. It was directed by Richard Thorpe and produced by Pandro S. Berman. The screenplay was by Robert Ardrey, adapted by George Froeschel from the 1823 novel Quentin Durward by Sir Walter Scott.

In 1465, honorable but penniless Scottish knight Quentin Durward agrees to go to France to find out if the beautiful young heiress, Isabelle, Countess of Marcroy, would be a suitable wife for his aged uncle (that is, if she is as rich as is claimed). The marriage has been arranged by Charles, Duke of Burgundy, for his ward to cement an alliance with Scotland, but she wants nothing to do with it, so she runs away and seeks the protection of Charles' great rival, Louis XI, King of France. Quentin pursues and manages to foil an attempted robbery by brigands under the command of Count William de La Marck, though Isabelle continues on her way unaware of her protector's identity.