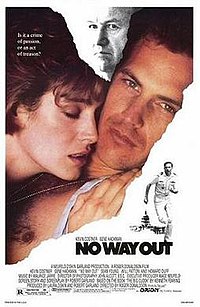 No Way Out is a 1987 American neo-noir political thriller film directed by Roger Donaldson and starring Kevin Costner, Gene Hackman, Will Patton and Sean Young. Howard Duff, George Dzundza, Jason Bernard, Fred Thompson, and Iman appear in supporting roles. The film is based on the 1946 novel The Big Clock by Kenneth Fearing, previously filmed as The Big Clock (1948) and Police Python 357 (1976).

U.S. Navy Lieutenant Commander Tom Farrell is interrogated by two men about how he first met Secretary of Defense David Brice. Farrell describes being invited to an inaugural ball by his college buddy Scott Pritchard, who intends to introduce him to Brice. Pritchard hopes that Brice will transfer Farrell to the Pentagon. On meeting Farrell, Brice is unimpressed and virtually ignores him. Moments later, Farrell begins flirting with another guest, Susan Atwell. The two have sex in her limousine and at the apartment of Nina Beka, a friend of Susan's, even though she has admitted to Farrell that she is also involved with a married man. The next day, Farrell bids her good-bye at the airport, on his way back to active duty; but their one-night encounter has clearly had a profound romantic effect on both of them.