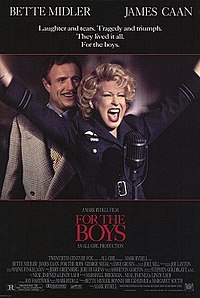 For the Boys is a 1991 American musical comedy-drama film that traces the life of Dixie Leonard, a 1940s actress/singer who teams up with Eddie Sparks, a famous performer, to entertain American troops.

In the early 1990s, retired entertainer Dixie Leonard has a commitment to attend a Hollywood ceremony being televised live to honor her and her longtime show-biz partner Eddie Sparks. When a young man from the TV show comes to pick her up, Dixie balks and explains what brought Eddie and her together, as well as what drove them apart. The majority of the film is an extended flashback.