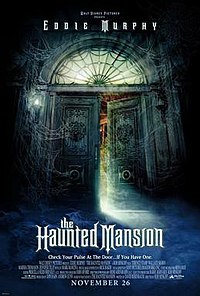 The Haunted Mansion is a 2003 American supernatural horror comedy film directed by Rob Minkoff and based on Walt Disney's theme park attraction of the same name. The film stars Eddie Murphy as a realtor who, along with his family, becomes trapped in a haunted mansion. Terence Stamp, Nathaniel Parker, Marsha Thomason, and Jennifer Tilly appear in supporting roles.

Jim and Sara Evers are successful realtors with two children, Michael and Megan. A workaholic with little time for his family, Jim misses his wedding anniversary and tries to make amends by suggesting a vacation to the nearby lake. Sara is contacted by the occupants of Gracey Manor, located in the nearby bayou; Jim, eager to make a deal after learning where the mansion is, takes his family there, meeting its owner, Edward Gracey, his butler Ramsley and his other servants; maid Emma and footman Ezra.