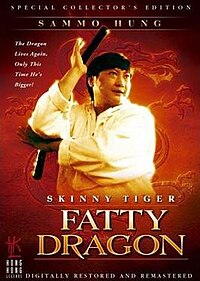 Skinny Tiger, Fatty Dragon is a 1990 Hong Kong action comedy film directed by Lau Kar-wing, who also co-stars in the film. The film stars Sammo Hung and Karl Maka. The trio had worked together in the late 1970s, making two films for Lau and Hung's short-lived Gar Bo Motion Picture Company. Whilst Lau continued to appear in Hung's films for Golden Harvest throughout the 1980s, Maka had gone on to co-run Cinema City. Skinny Tiger, Fatty Dragon was therefore something of a reunion for the three actors.

Fatty (Sammo Hung) and Baldy (Karl Maka) are a pair of detectives dealing with a crime syndicate of Triad gangsters. After a jewelry robbery, they later find Lai (Carrie Ng), a woman who is associated with the gangsters, but end up getting themselves into trouble for going into the women's changing room.