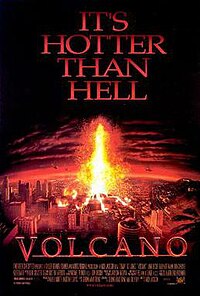 Volcano is a 1997 American disaster film directed by Mick Jackson and produced by Neal H. Moritz and Andrew Z. Davis. The film stars Tommy Lee Jones, Anne Heche, Don Cheadle, and Keith David and tells the story of an effort to divert the path of a dangerous lava flow through the streets of Los Angeles following the formation of a volcano at the La Brea Tar Pits. The storyline was conceived from a screenplay written by Jerome Armstrong and Billy Ray, and was inspired by the 1943 formation of the Parícutin volcano in Mexico.

In downtown Los Angeles, an earthquake strikes. Mike Roark, the new director of the city's Office of Emergency Management, insists on coming to work to help out with the crisis even though he has been on vacation with his daughter Kelly. His associate Emmit Reese notes that the quake caused no major damage, but seven utility workers are later burned to death in a storm drain at MacArthur Park.