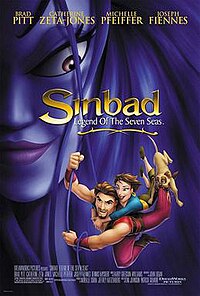 Sinbad: Legend of the Seven Seas 2003

Sinbad: Legend of the Seven Seas (also known as Sinbad) is a 2003 American animated adventure film produced by DreamWorks Animation and distributed by DreamWorks Pictures. The film uses traditional animation with some computer animation. It was directed by Tim Johnson and Patrick Gilmore (in Gilmore's feature directorial debut) and written by John Logan, and stars the voices of Brad Pitt, Catherine Zeta-Jones, Michelle Pfeiffer, and Joseph Fiennes. The film covers the story of Sinbad (voiced by Pitt), a pirate who travels the sea with his dog and his loyal friend Marina (voiced by Zeta-Jones) to recover the lost Book of Peace from Eris (voiced by Pfeiffer) to save his childhood friend, Prince Proteus (voiced by Fiennes), from accepting Sinbad's death sentence. The film blends elements from the 1001 Arabian Nights and classical myths.

Sinbad and his pirate crew attempt to steal the magical "Book of Peace" that protects the kingdom of Syracuse and hold it for ransom as one last job before retiring. Sinbad is surprised to see it is being protected while on board to Syracuse by Syracuse’s Prince Proteus. Proteus was once Sinbad's best friend as a child, but Sinbad apparently drifted away from him, giving no reason why. Proteus then tells Sinbad if their friendship ever meant anything he can prove it. Sinbad tries to steal the book anyway, but is prevented when Cetus attacks the ship. The two work together to fight off Cetus and for a moment reaffirm their bond. Just when it seems the beast is defeated, Sinbad is dragged off the ship. Proteus goes to save Sinbad, but is stopped by his crew.