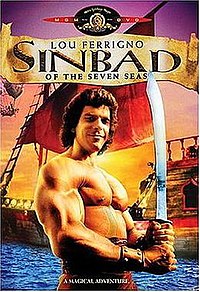 Sinbad of the Seven Seas is a 1989 Italian fantasy film produced and directed by Enzo G. Castellari from a story by Luigi Cozzi, revolving around the adventures of Sinbad the Sailor. Sinbad must recover five magical stones to free the city of Basra from the evil spell cast by a wizard, which his journey takes him to mysterious islands and he must battle magical creatures in order to save the world.

The film is narrated by a mother who tells her daughter a bedtime story from a large book: In the city of Basra, the evil vizier Jaffar has clouded the caliph's mind and imprisoned his daughter, Princess Alina in order to marry her. Jaffar has four of the town's five sacred gems sent to dangerous and evil places where they will be carefully guarded by magical forces. Sinbad and his crew arrive at the caliph's palace, only to be captured by the hypnotised soldiers. Jaffar sentences Sinbad's crew to the torture chamber while the mighty sailor is to be locked in a pit full of snakes. Sinbad gets out of the snake pit using some snakes tied together into a rope and later rescues his companions from the torture chamber. As they flee the controlled Basra, Jaffar grants power from evil forces to help him kill Sinbad, this summons an evil cloud over Sinbad's ship and the Legions of Darkness, undead warriors. Together with the help of his friends, Sinbad manages to defeat the undead and the leader.