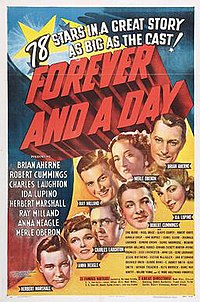 Forever and a Day is a 1943 American drama film, a collaborative effort employing seven directors/producers and 22 writers, including an uncredited Alfred Hitchcock, with an enormous cast of well-known stars.

In World War II, American Gates Trimble Pomfret (Kent Smith) is in London during the Blitz to sell the ancestral family house. The current tenant, Lesley Trimble (Ruth Warrick), tries to dissuade him from selling by telling him the 140-year history of the place and the connections between the Trimble and Pomfret families.