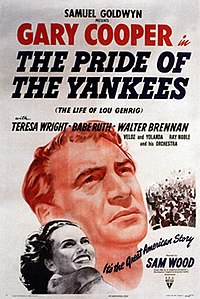 The Pride of the Yankees: The Life of Lou Gehrig 1942

The Pride of the Yankees is a 1942 American film produced by Samuel Goldwyn, directed by Sam Wood, and starring Gary Cooper, Teresa Wright, and Walter Brennan. It is a tribute to the legendary New York Yankees first baseman Lou Gehrig, who died only one year before its release, at age 37, from amyotrophic lateral sclerosis, which later became known to the lay public as "Lou Gehrig's disease".

Lou Gehrig (Cooper) is a young Columbia University student whose old-fashioned mother (Elsa Janssen) wants him to study hard and become an engineer, but the young man has a gift for baseball. A sportswriter (Brennan) befriends Gehrig and persuades a scout to come see him play. When his mother gets sick, Gehrig signs with the team he has always revered, the New York Yankees to pay for the hospital bills. With the help of his father (Ludwig Stössel), he endeavors to keep his career change a secret from his mother.