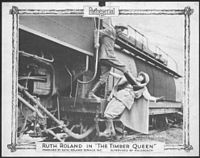 The Timber Queen is a 1922 American action silent film serial directed by Fred Jackman. The film serial stars Ruth Roland and Bruce Gordon. Produced by Pathé Exchange, the serial was advertised as "The beautiful scenery! The forest, the train, everything just looks so 'outdoors'! Great cinematography." Next to Pearl White, another of Pathe studio's prominent serial queens, Ruth Roland appears in Western serials like Ruth of the Rockies (1920) and White Eagle (1922).

After the death of her father, Ruth Reading (Ruth Roland) inherits ownership of a large acreage of forest. Her boyfriend Don Mackay (Bruce Gordon) is a neighbouring farmer who is in love with Ruth, but is too bashful to tell her.