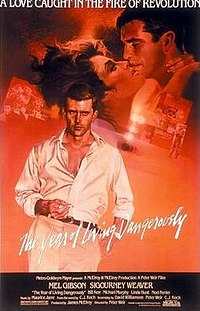 The Year of Living Dangerously 1982

The Year of Living Dangerously is a 1982 Australian romantic drama film directed by Peter Weir and co-written by Weir and David Williamson. It was adapted from Christopher Koch's 1978 novel The Year of Living Dangerously. The story is about a love affair set in Indonesia during the overthrow of President Sukarno. It follows a group of foreign correspondents in Jakarta on the eve of an attempted coup by the 30 September Movement in 1965.

Guy Hamilton, a neophyte foreign correspondent for an Australian TV network, arrives in Jakarta on assignment. He meets the close-knit members of the foreign correspondent community, including journalists from the UK, the US, and New Zealand, diplomatic personnel—and Billy Kwan, a Chinese-Australian man with dwarfism of high intelligence and moral seriousness. Hamilton is initially unsuccessful because his predecessor, tired of life in Indonesia, had departed without introducing Hamilton to his contacts. He receives limited sympathy from the journalist community, which competes for scraps of information from Sukarno's regime, the Communist Party of Indonesia (PKI), and the conservative Muslim Indonesian military. However, Billy takes a liking to Guy and arranges interviews for him with key political figures.