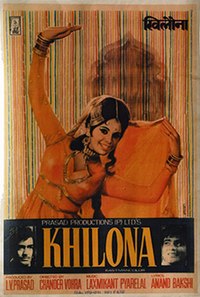 Khilona (; Hindi: खिलौना) is a 1970 Bollywood drama film, produced by L.V. Prasad under the Prasad Productions Pvt. Ltd. banner and directed by Chander Vohra. It stars Sanjeev Kumar, Mumtaz, Jeetendra in lead roles and music composed by Laxmikant-Pyarelal. The film is recorded as a "Super Hit" at Box Office India. The film was a remake of the Telugu movie Punarjanma (1963) and it was simultaneously made in Tamil movie Engirundho Vandhaal, with Sivaji Ganesan and Jayalalithaa, and later on in Malayalam as Amrithavaahini.

Vijaykamal (Sanjeev Kumar) is a son of rich Thakur Suraj Singh, but has lost his mind. He sees his lover Sapna marry his neighbor Bihari (Shatrughan Sinha) and then she commit suicide on the night of the Diwali party hosted by Bihari. This incident puts Vijay in shock. Thakur believes that if Vijay gets married, his mental health would improve. He hence approaches a tawaif, Chand (Mumtaz) to pretend to be Vijay's wife and thus help him get better. But Chand receives cold treatment from Vijay's mother and his elder brother Kishore. Once, in a fit of madness, Vijay sexually assaults Chand. But later, Chand becomes very friendly with Vijay and that starts improving his condition.