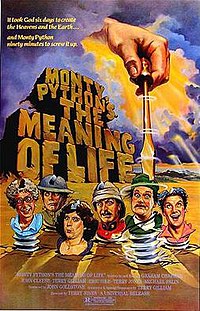 Monty Python's The Meaning of Life 1983

A group of fish in a posh restaurant's tank swim together casually, until they look at the customers outside of the tank and see their friend Howard being eaten. This leads them to question the meaning of life. The question is explored in the first sketch, "The Miracle of Birth", which features a woman in labour being ignored by the doctors in favour of impressing the hospital's medically-clueless administrator. Meanwhile, in Yorkshire, described as "the third world", a Roman Catholic man loses his job and returns home to tell his numerous children that he will have to sell them off for scientific experiments due to the Catholic church's opposition to contraception; this leads to the musical number "Every Sperm Is Sacred". A Protestant man with his wife looks on disapprovingly, and proudly remarks that Protestants can use contraception and have sex for pleasure (though his wife points out that they never do).