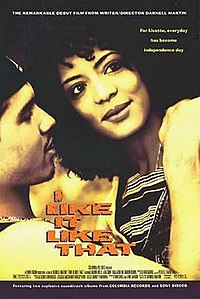 I Like It Like That is a 1994 American comedy-drama film about the trials and tribulations of a young Puerto Rican man and a half Jamaican Puerto Rican American woman living in a poverty-stricken New York City neighborhood in the South Bronx. The film stars Lauren Velez, Jon Seda, Lisa Vidal, Griffin Dunne, Jesse Borrego and Rita Moreno, and was written and directed by Darnell Martin who, in her filmmaking debut, became the first African-American female filmmaker to take helm of a film produced by a major film studio.

Lisette Linares (Lauren Velez) is a young mother of three children, married to Chino (Jon Seda), a bicycle messenger. Although he is always reliable as the breadwinner of the family, Chino is having an affair with neighbor Magdalena (Lisa Vidal). One summer evening as a blackout sweeps the neighborhood, Chino gets arrested for looting.